Why Does Nature Abhor a Vacuum?

This is untrue, nature does not abhor a vacuum.

The idea dates back to at least Aristotle (384-322 BCE) who, in his treatise on Physics, wrote that a vacuum (void) cannot exist because Nature would immediately fill that void with something.1

This was later rendered in Latin as horror vacui and rephrased as Natura abhorret vacuum by Francois Rabelais (1494-1553) in his novel Gargantua, published in 1534 (although it was not a philosophical or scientific work, the expression stuck).

The first time people noticed a problem with this seems to be in the 17th century when Galileo (1564-1642) wrote in his Discourses and Mathematical Demonstrations Relating to Two New Sciences:

I once saw a cistern which had been provided with a pump under the mistaken impression that the water might be drawn with less effort or in greater quantity than by using an ordinary bucket. The pump had its sucker and valve in the upper part so that the water was lifted by attraction and not by a push as is the case with pumps where the sucker is placed at the bottom. This pump worked perfectly so long as the water in the cistern stood above a certain level; but below this level the pump failed to work. When I first noticed this, I thought the machine was out of order; but the workman I called in to repair it, told me the problem was not the pump but that the water which had fallen too low to be raised to such a height; and he added that it was impossible, using any machine operating on the principle of attraction, to lift water above eighteen cubits; this is the limit of the lifting power of attraction.

Galileo noticed that nature abhorred a vacuum but only, it seemed, to a height of 10m (33ft).

His pupil, Evangelista Torricelli (1608-1647), did some experiments and came to the conclusion that the water was not being lifted by the attraction of the vacuum formed inside the pump, but by the pressure of the air outside. He hypothesized that it was the weight of the air pushing the water up and not the attraction of the vacuum and decided to use mercury – which is 13.6 times more dense than water.  He reasoned that if it was an external force (the atmosphere) pushing instead of the vacuum pulling, a column of mercury should rise to a height about 1/13th of a column of water. He filled a glass tube, sealed at one end, with mercury, inverted it, and placed it in a basin of mercury. The mercury fell to a height of ~760mm – the height expected if an external force was pushing the mercury up into the vacuum. As Torricelli wrote to Michelangelo Ricci (1619-1681) in 1644:

Many have said that a vacuum does not exist, others say that it does exist despite the repugnance of nature and with difficulty; I know of no one who has said that it exists without difficulty and without a resistance from nature. I argue that: If something can be found that explains the resistance we experience when trying to create a vacuum, it seems to me foolish to attribute to vacuum that which is caused by something else; and from some very simple calculations, I found the cause to be the weight of the atmosphere. … We live at the bottom of a sea of air, which by experiment has weight, and so much weight that the densest air in the neighborhood of the surface of the earth weighs about one four-hundredth part of the weight of water.

The general scientific consensus of the time followed the Aristotelian view that a vacuum was impossible and therefore Torricelli’s “supposed” vacuum was in fact some sort of invisible matter. 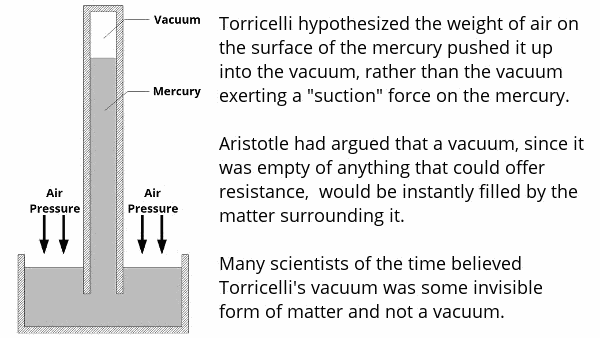 I poured 8kg of mercury into a vessel, then took several glass tubes, each 120cm long and hermetically sealed at one end and opened at the other, then placed them in the vessel mercury. I found the mercury stood at 711mm above the mercury in the vessel.

I attached one of the tubes to the vessel and marked the height of the mercury and asked Father Chastin to watch if any changes should occur through the day. Taking the other tube and a portion of mercury I walked to the top of Puy-de-Dôme, about 1000m higher than the monastery, where I found that the mercury reached a height of only 627mm. I repeated the experiment five times with care and found the same height of mercury in each case

This showed that weight of the air pushing the mercury into the vacuum was less at the top of the mountain than at its base.

Even so, there were still many skeptics. The general argument being that if air (atmosphere) did have weight then its weight would crush every living thing. Otto von Guericke, supported Torricelli’s idea and did many vacuum experiments himself. In his book Experimenta Nova (New Experiments) he addresses this objection by writing:

Dr. Deusingius should bear in mind that the air does not just press on our heads; it flows all around us pressing from above on the head, and likewise pressing on the soles of the feet from below and all around the body at the same time. In fact, it is the body which fills space, and air which fills the remaining empty spaces. Just as the fish in water do not perceive the pressure around them, we perceive even less the pressure of the air around us.

Torricelli’s work lead to the development of the barometer – which is used to measure air pressure. As well, the pressure unit torr is named in honour of him and represents 1mm of mercury (or 1/760th of one atmosphere)

10m is the maximum height a vacuum pump can raise water

Galileo assumed 10m was the limit a vacuum could lift water

"Nature abhors a vacuum" comes from the 16th century